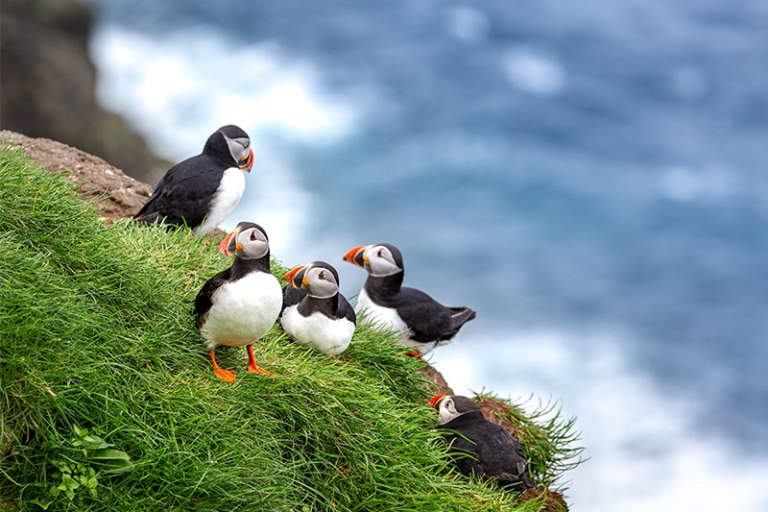 If you’re interested in bird-watching then visiting Iceland during summer months is one of the best things you can do for watching puffins – a unique species of cute birds that are abundant in the country. You would be amazed to know that Iceland is home to more than 60% of the world’s puffins. That amounts to a whopping figure around 8 to 10 million. Without any doubt, Iceland is the puffin capital of the world. A word about Atlantic Puffin

It is a fact that puffins have breeding grounds around The Arctic circle and Atlantic waters. Recently the species has been rated as vulnerable. They are also known as sea parrots. The puffins mostly spend their life at sea but come to the coasts during spring months that you will witness during private tours in Iceland. They usually nest in cliff-top colonies.

When can you see puffins in Iceland?

If you are interested to visit Iceland with the sole purpose of watching puffins then the months between May and August are the best for your Iceland Tours. The beautiful birds arrive in late April. They stay in Iceland until the latest weeks of August. They are most active during the evening time.

The best Icelandic locations where you can watch them

There are curated puffin-watching tours in Iceland. You can avail of a suitable package that provides you the opportunity to watch the birds in huge numbers. There are two Islands called Akurey and Lundey in the vicinity of the Reykjavik coastline. It has 100% guarantee of puffin-watching experiences in summer. Every summer in a place called Borgarfjorour, about 10000 puffin couples flock with numerous other species of birds. Local authorities make a live video stream of these birds. Their wooden platforms and specific shelters let you watch for the birds without risking any fall. The Tjornes Peninsula in North Iceland has a famous route that has been named The Bird Trail due to great bird-watching points. You can enjoy bird-watching and click photographs of this lovely species at the spot.

This was my second time taking a personalized tour with Discover Iceland. The first was in the summer of 2016 with my kids and it was incredible. That review is... read more buried somewhere down below. This time I went with my wife in mid-March and once again all I can say is that the experience was truly outstanding. We spent a total of 5 days including the Golden Circle, South Coast, Reykjanes and Snaefellsnes Peninsulas. Amazingly, this trip was delayed 2 years due to the pandemic. We were due to go in March, 2020, but we all know what happened then. While Discover Iceland did not refund our deposit back then, they promised to us we could apply it to any future trip with no expiration and so we were finally able to do so. I won't discuss all the amazing things we saw in Iceland--you can find that on their website and elsewhere. Suffice it to say it is a truly spectacular place and equally beautiful in winter as I saw it this time as in summer. Our guide was Georg (not the owner Georg) and he was fantastic. He was a great driver and a guide with a wealth of knowledge and nice and easygoing. The weather was a bit tough a couple of days and he had to improvise and did so really well. We will definitely go back to Iceland and definitely choose Discover Iceland again and while I am sure all their guides are great, we would love to have Georg back with us again. All in all, a great experience. You will not go wrong by choosing Discover Iceland.